A friend’s photo (Royce Rumsey) from this year’s the 2017 Pebble Beach Tour and Concours d’Elegance of this classic, powerful touring roadster, is what inspired this painting. 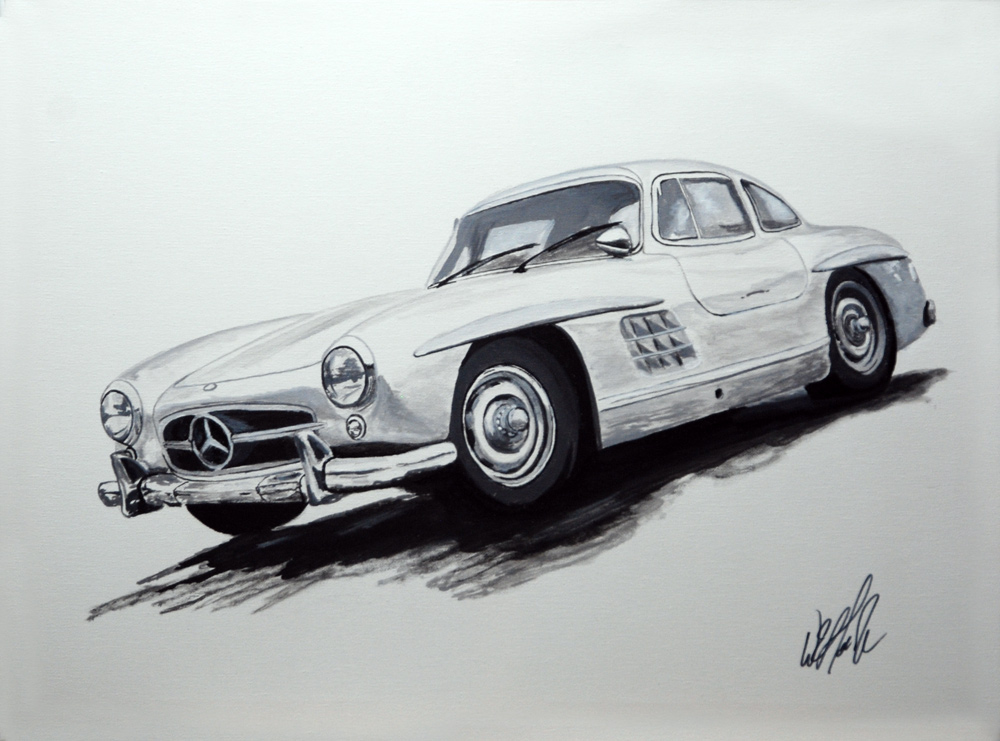 As the car was silver, I chose to do the painting in a monotone technique to accentuate the lines of this extraordinary vehicle. This new addition to my portfolio, the 18″ x 24″ acrylic on canvas painting. Be the one to ensure the original is part of your collection. Reproductions will be available as well as apparel featuring this artwork. Inquire here.

The Mercedes-Benz 300 SL (W198) was the first iteration of the SL-Class grand tourer and fastest production car of its day. Introduced in 1954 as a two-seat coupé with distinctive gull-wing doors, it was later offered as an open roadster.

The idea of a toned-down Grand Prix car tailored to affluent performance enthusiasts in the booming post-war American market was suggested by Max Hoffman. Mercedes accepted the gamble and the new 300 SL – 300 for its 3.0 litre engine displacement and SL for Sport Leicht (Sport Light) – was introduced at the 1954 New York Auto Show rather than the Frankfurt or Geneva gatherings company models made their usual debuts.

Immediately successful and today iconic, the 300 SL stood alone with its distinctive doors, first-ever production fuel injection, and world’s fastest top speed. The original coupé was available from March 1955 to 1957, the roadster from 1957 to 1963.